Ohhhh yum!  I made this a few weeks ago, and put it on the menu for this week as well.  However, I am saving it for one of the last meals because it doesn’t require a lot of ingredients that can go bad, unlike the other meals I have planned.  Well, Mr. Rodgers saw it on the menu and has been asking every couple days “WHEN CAN WE HAVE MEATBALLS?!”

That’s a good sign that this is a winner.  And you know what’s so great about it?  It’s super easy.  Aside from cooking the spaghetti squash, I had done the prep with other meals.  Allow me to explain.

Remember that amazingly yummy Saucy Paleo Pot Roast I posted about earlier?  And I told you to throw that extra sauce in a tupperware and freeze it?  Yeah.  Meatball sauce.  Check.  It worked PERFECTLY!

And remember that home made sausage recipe I rave about?  Yeah.  Double batch.  Make half into patties, half into balls.  Cook the sausage for your breakfast and toss the balls into a ziploc raw and put in your freezer.  Meatballs.  BAM!

Easy peasy, and delicious.  And healthy!  And apparently…it makes husbands really happy.  Can’t get better than that!

So, here’s what you need:

And here’s how you do it! 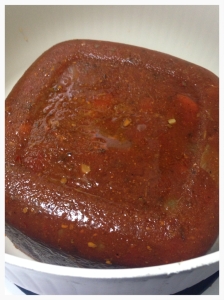 Place sauce into pot over medium heat and begin melting.  Get your squash cooking at the same time!

Yay bubbling sauce!  Reduce to a simmer and add meatballs, letting cook at least half an hour, or until squash is ready!

When squash is tender, remove from oven.  Carefully cut in half and remove seeds.

Scrape flesh out in strands and place in a bowl. 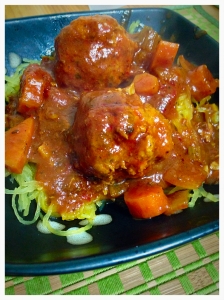 Smother in sauce and meatballs, and DEVOUR!  Doesn’t that look amazing?!  It was just so tasty!!  I hope you enjoy this easy idea on how to prep for multiple meals at once and feed your family a super nutritious meal!