Yum.  I was crazy about this roast.  I’ve heard that some people don’t like the taste of lamb.  I think…that is madness.  Especially after you have tasted something like this.  D.  Lish.  I cooked this at my boss’s house on a night I knew was going to busy.  I’m all about having family dinners, where you make nice fancy food, sit down together; everything stops and you just eat and talk about your day.However, unfortunately in real life that can’t always happen.  Boo.  There are times where we eat dinner in the car between jobs.  Which was one such night when I made this.  However, as we sat in our car in a parking lot eating this roast with some nice green veggies on the side…it was like I was transported from my Le Sabre into a fancy restaurant, out on a date with my man.  It.  Was.  Fabulous.  In fact my boss was kind of hinting that she wouldn’t mind if I left some of the food that made that wonderful smell at her house, haha!

So before I tell you how to do this, let me just make a note.  I KNOW lamb roast is expensive.  Sad day.  But guess what we realized?  We used a roast that was about 4 lbs.  And it lasted us 3 nights!  So when you do the math…it wasn’t that expensive for three dinners at all!!  And that was with feeding our bestie Joseph one night as well.  He came over for a Psych party.  Yeah.  That happened.  Lamb roast, green beans, best friends and Psych.  What more could you need?

So, here’s what you need:

And here’s what you do:

Thanks to perfectweightamerica.com for this roast.  🙂

Here is my roast, ready to marinate 🙂  Yeah, I know…lots of marinade.  I probably could have halved it, HOWEVER…it made for a great browned sauce to scoop onto my slices.  So I probably wouldn’t change a thing 🙂  It made a sort of shell, which held in the moisture that made it super moist.  Don’t be alarmed that the sauce gets brown.  It makes it super delish 🙂 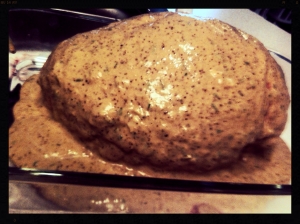 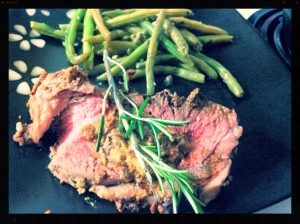